Showing posts from September, 2017
Show all

This is step by step guide which will let you run the CentOS 7 VM on your virtual box installation. In this tutorials are illustrated using Mac.

Make sure your if your machine allows virtualization. Check your host OS is supported for VirtualboxDownload VirtualBox from the here. Install the VirtualBox. Check the installation by running below command.

Vagrant manages virtual machines hosted in Oracle VirtualBox. A virtual machine is a software implementation of a computer, running a complete operating system stack on a virtualizer.

Download Vagrant from here. Install the vagrant.Check the installation by running below command.
Setup CentOS VM
Once you are done with vagrant, now you are ready to setup your CentOS VM.  Run below command, which will create "vagrantfile" under the current working directory. The vagrantfile can be used to config…
Post a Comment
Read more 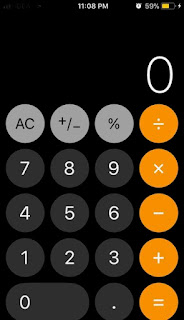 Yesterday Sept 19 2017 Apple released iOS 11. iOS 11 is bundled with lots of features, which you might be aware right now, but there are more little changes.

First striking change you will notice once you get started after upgrading to iOS 11 is the icons. The icons of iOS pre-loaded apps would feel different, and would give you feel of having a new device in hand. The calculator app UI is redesigned as shown below
If you take a screenshot, iOS 11 will let you edit the screenshot before saving.

One thing I noticed that the margin left for the header part is more in majority of the apps like settings, photos. I am not sure this thing is with iPhone 5s only or with others as well, but certainly it eats up screen real estate.