How to switch boot order within Windows & Linux

- August 18, 2012
If you have both Windows and Linux installed on your computer, default  booting operating system would be Linux.
If you are frequent Windows user than Linux, the default booting OS(Operating System) should be Windows else you will waste time in every time choose boot to Windows.
Note that to change the boot sequence you will require the root level access as you are going to modify "/boot/grub/grub.cfg".
If you are using x windows system, open the file "/boot/grub/grub.cfg" using any text editor. If you don't have root level access then open text editor using sudo command as:

sudo -u root gedit
Then open the file grub.cfg. In the grub.cfg search for "menuentry" and check for menuentry having "Windows " loader line.
Count the number of menuentries before Windows entry. Do not count Windows entry as menu entry start from 0. Set the counted value at: 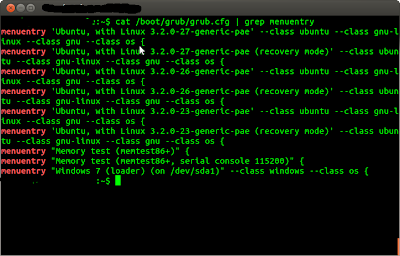 Note: While counting for "menuentry" make sure that count one menuentry for all "menuentry" present under submenu such as in above image submenu "Previous Linux versions"{ }. For this you will have to open file in text editor or cat completed file on terminal, to check what entries present under Submenu.

Popular posts from this blog 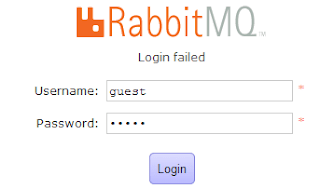 If you have newly installed RabbitMQ server and trying to view queues or exchanges using RabbitMQ web management console you may see below error, while login with guest account.


2. Once plugin is enabled, you will need to update the rabbitmq.config file. Create if not exists and edit "/etc/rabbitmq/rabbitmq.config" file.
Append below line to the file


Do not miss last dot from the line. Once the changes are saved, restart RabbiMQ server using below command

Now you should be able to login to management console with guest user account.

MSMQ error : "A workgroup installation computer does not support the operation."

- September 04, 2012
You may get exception saying "A workgroup installation computer does not support the operation.", when you are trying to create or send message to MessageQueue.
In order to resolve the error :
Check your installation of the MSMQ if it is installed in the Workgroup Mode? You should select AD integration mode during installation.If you had selected AD integration mode, then check the event logs for MSMQ installation if it had failed during initialization. Insure that your domain controller is accessible from the machine where MSMQ is installed.In any of the cases event logs should able to provide you the required details if installation or initialization is failed. 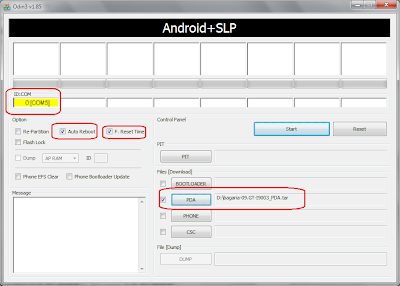 ** I Will Not responsible for any damage done with use of below mentioned methods. ** To flash the CWM recovery to your Samsung Galaxy SL you will require to following things in place: Odin  : you can download it from here.CWM Recovery image : you can download it from here. Thanks to XDA-developers. USB driver to connect your phone with computer. Install Samsung Kias so it will install the USB driver. Once you have downloaded above required items and installed the USB driver, reboot you phone to download mode. You can read how to reboot phone in download mode from here. Now connect the phone with USB cable to computer.
Extract the Odin from the zip file that you have downloaded at some location on your computer and launch the Odin executable by double clicking it. Wait for Odin to detect your phone.You will be able to see it in yellow once detected on odin screen as shown below.
Click the PDA button to select the CWM recovery image. Once you have selected the recovery image, check the od…
Read more