Showing posts from October, 2017
Show all

Before you go ahead check if you have pip installed by using command below.
$ pip --version pip 9.0.1 from /Library/Python/2.7/site-packages (python 2.7)
You can install pip in multiple ways on CentOS. I will discuss here two ways to install pip.

Update the packages first, just to be updated.
$ yum -y update Once update is complete, you can run below command to install the pip.

First step is to download the python script to install pip.
$ curl "https://bootstrap.pypa.io/get-pip.py" -o "get-pip.py" Once the script is downloaded you can run…
Post a Comment
Read more

- October 04, 2017
Python is most commonly used development and scripting tool. You can setup Python on CentOS by multiple ways.

How to Install Java 8 on CentOS 7 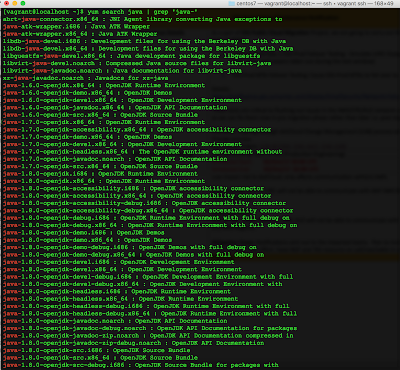 Java is most common requirement for many of the Open Source softwares. You can follow below steps to install Java on CentOS vm.

You can first check the list of available packages for Java using below command.

You will get the list like above. Now depending on what is your requirement you can choose the package. If you don't see any list as above, you will need to update the REPO for java.

To install JRE you can run below command.

$ sudo yum install java-1.8.0-openjdk*
The above commands will ask for downloading the required dependencies, press Y and enter to continue with installation. Once installation completes it will display the dependencies installed and complete message.

Now you can verify the installation by running below command.